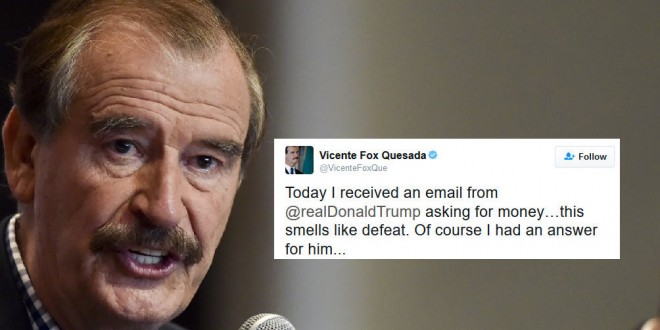 Former Mexican President Vicente Fox Quesada claimed he received a fundraising email from Republican presidential nominee Donald Trump. It is against federal law for a campaign to solicit foreign donations. The Trump campaign has received several warnings about such solicitations and a complaint has been filed with the Department of Justice. Other foreign officials have claimed to have received similar pleas for funds from the Trump campaign.

Today I received an email from @realDonaldTrump asking for money…this smells like defeat. Of course I had an answer for him… pic.twitter.com/VbtjZm5eRm

Previous Conway: Trump Didn’t Lie About Lester Holt Being A Democrat, He Spoke Without Knowing The Truth
Next Birther Kingpin Jerome Corsi: Hillary Has Epilepsy