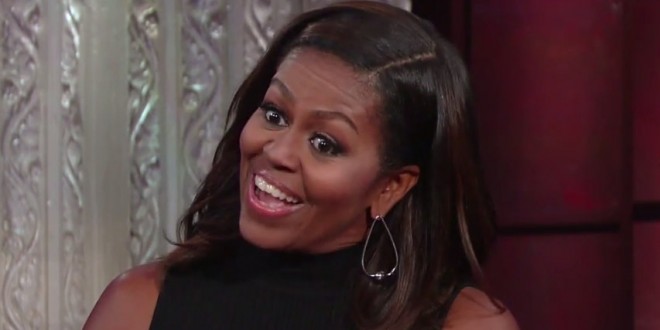 After more than two decades of marriage, First Lady Michelle Obama definitely knows her famous husband. The public figure sat down with Stephen Colbert Tuesday night to dish on Beyoncé, sleepovers at Buckingham Palace and her love of french fries. While all of the topics provided fascinating insight into America’s first family, the most unforgettable moment came when the first lady decided to share her impression of President Barack Obama, who she’s been married to since 1992.

“All three of us have good impressions of Barack,” she told Colbert, referencing their two daughters, Sasha and Malia. “It’s usually at the dinner table. Malia will start it because she usually asks the serious question.” Then, Michelle launched into her impersonation, mimicking the president as he would answer his daughter’s question about a daily event. Meanwhile, Michelle and Sasha are zoning out. “Sasha and I want to talk about our favorite song on the Lemonade album,” she joked.