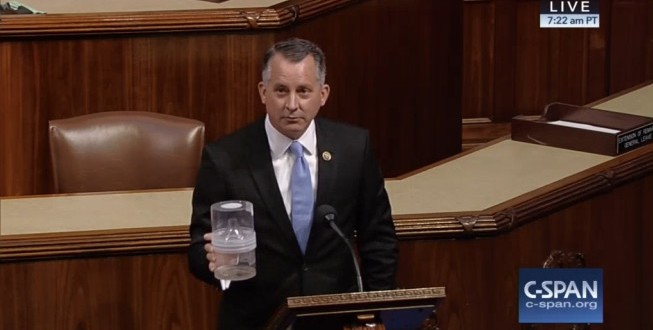 Most people are trying to avoid Florida mosquitoes, blamed for dozens of cases of the Zika virus. But Republican Rep. David Jolly decided to make a point Wednesday by bringing a container of them to the House floor.

“The politics of Zika are garbage right now,” the Florida lawmaker said in a short, angry speech condemning Congress for failing to pass legislation providing $1.1 billion to combat the mosquito-borne virus. That bill is stalled in the Senate, where Democrats are blocking it in a dispute over restrictions on Planned Parenthood.

Jolly was holding a closed, clear container of the Aedes aegypti mosquitoes, which are the type that carry the Zika virus linked to birth defects. His office said they are still in the larvae stage but are expected to hatch on Wednesday.

He said the mosquitoes in the container are free of the virus, but taunted his fellow lawmakers about what they would do if they were released. “Can you imagine, colleagues, the fear and anxiety in this chamber if these hundred mosquitoes were outside this jar not inside this jar?” Jolly asked.

UNRELATED: Totally not gay former Florida Gov. Charlie Crist, who is now a Democrat, is challenging Jolly for his US House seat.