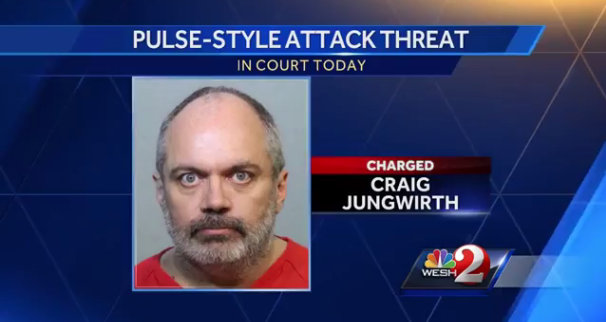 Craig Jungwirth, 50, who is facing federal charges of making an online threat to members of the gay community in a small South Florida town, will remain in custody through the weekend. That may change by Monday.

In his first court appearance Thursday afternoon, Jungwirth’s attorney told federal Magistrate David Baker that he will ask for Jungwirth’s release Monday on a pretrial bond. Prosecutors asked for that matter to be continued Thursday to give them time to get an FBI agent from South Florida to court Monday to provide testimony.

Before his arrest Saturday, Jungwirth had been staying with his mother at her southwest Orlando duplex. She was also at his Thursday afternoon court appearance. When asked by WESH 2 News if she was afraid of her son, she said, “No, no comment.” Jungwirth’s sister, Shanna Berger, twice blew him kisses in court and said she was there to support him.

Hit the link to see the video interview with his sister. His mother ran from the camera.