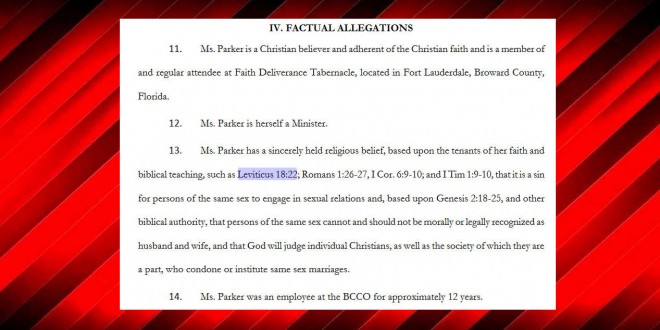 A former court specialist is suing Broward Clerk of Courts Howard Forman for firing her over what she is claiming to be religious discrimination. According to a lawsuit obtained by Local 10 News, Yanicka Parker also works as a minister and is a regular attendee of Faith Deliverance Tabernacle, in Fort Lauderdale.

Parker claims in the lawsuit that she had worked as a court specialist for the Broward County Clerk’s Office for about 12 years and performed dozens of tasks, including the issuing of marriage licenses.

According to Parker, an email was sent to all Broward County clerks before same-sex marriage was legalized Jan. 6, 2015, informing them that they would soon be expected to issue marriage licenses and perform ceremonies for same-sex couples.

Parker claims that she notified her supervisors that she would not be able to perform the ceremonies and issue marriage licenses to same-sex couples because of her Christian beliefs.

The lawsuit states that there were always multiple clerks on hand or supervisors who were willing to issue the marriage licenses to same-sex couples, yet Parker was sent home Jan. 6 and Jan. 7 for asking to be excused from those tasks.

The lawsuit is calling for a trial by jury and for compensation for all past and future wages, bonuses and benefits she would have received if she had not been terminated and attorney’s fees. Parker is also seeking unspecified damages for emotional harm, mental anguish, stress, anxiety and diminished reputation or stature. She was evicted from her home in July.