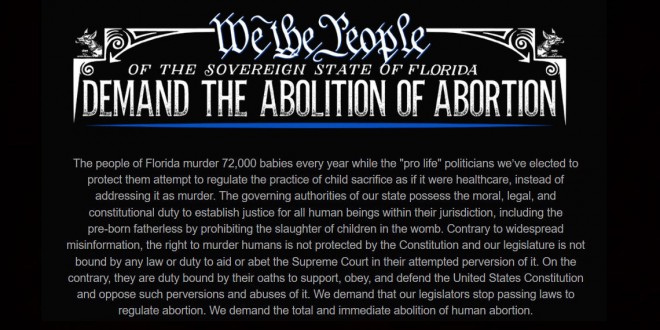 And their doctors, too. From the press release issued today by Christian Newswire:

The political committee Abolish Abortion Florida (AAFL) has launched a ballot initiative to amend the state’s constitution to punish abortion as capital murder. Under the proposed amendment, anyone who performs or procures an abortion would be charged with first degree, pre-meditated murder.

“Abortion” would include any abortifacient drug or device that can kill an embryo by preventing implantation, as well as the intentional destruction of unwanted IVF embryos. The amendment would define life as beginning at fertilization rather than “conception,” and declares that “abortion deprives an innocent human being of the inalienable right to life, liberty, and the pursuit of happiness.”

According to AAFL, the idea is not only to collect enough signatures to get the measure onto the 2018 ballot, but also to encourage legislators to begin putting forward legislation to abolish abortion instead of merely regulating it. Per AAFL: “The Supreme Court cannot make murder legal. Pro-life politicians have passed incremental regulations for decades, but it’s time to abolish abortion by recognizing it for what it is – cold-blooded murder – and prosecuting it accordingly.”

RELATED: Florida has executed 92 people since the death penalty was reinstated in 1972, most recently in January 2016. Currently there are 412 inmates awaiting execution in Florida.