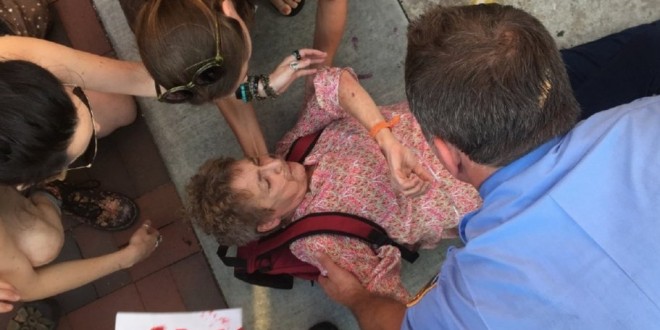 Police say they arrested five people at Trump’s Monday night rally in Asheville, and as of publishing have warrants out for two more people. Police plan to arrest Richard Campbell of Edisto Island, South Carolina for assault on a female. That female is 69-year-old Shirley Teeter. She has protested her whole life. Now she adds Trump to the list of things she’s protested against.

“Why did I get involved yesterday at my age? Because I ran into another situation that was sickening my heart,” she said Tuesday afternoon outside Cafe 64 in downtown Asheville. Protesters met Trump supporters before the rally, and Teeter was having fun.

“Whenever groups of them would start chanting ‘Trump, Trump, Trump, Trump’ I would chant back, ‘Dump, dump, dump, dump.’ It was kind of comical,” Teeter said. After the rally, Teeter experienced something she had never seen in all of her protests. The peace teetered over. “I said you better learn to speak Russian, and I said the first two words are going to be, ha ha. He stopped in his tracks, and he turned around and just cold-cocked me,” Teeter said. She was punched in the face.

Teeter says she fell on her oxygen tank and suffered sore ribs and a sore jaw. She thanks the police for driving her home and wonders if other Trump fans would find her attacker “deplorable.”