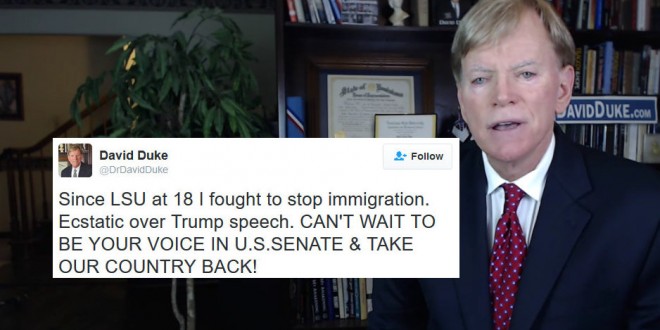 Earlier this week the Trump campaign disavowed David Duke’s pro-Trump robocalls to Louisiana voters, saying there’s no place for his message “in the Republican Party or our country.” Unswayed, last night Duke gleefully live-tweeted every anti-immigrant utterance made during Trump’s speech in Arizona, concluding with the above “ecstatic” summation. A poll released yesterday shows Duke at 6% in a crowded GOP field for the US Senate. Under Louisiana’s “jungle primary” rules, if no candidate takes at least 50% of the vote on November 8th, the top two finishers will compete in a runoff on December 3rd.