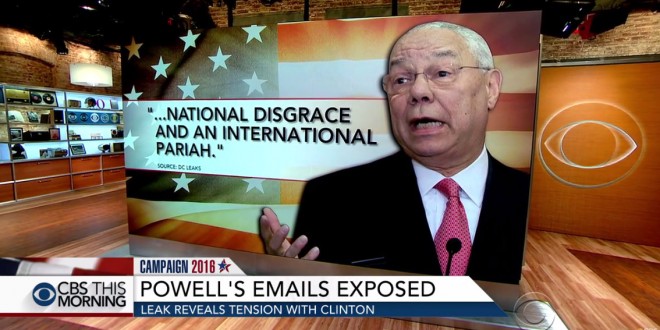 Former Secretary of State Colin Powell warned of the grave threat posed by Donald Trump, who he called “a national disgrace” and “international pariah,” in a series of leaked emails first obtained by BuzzFeed News and published Tuesday.

Powell confirmed the authenticity of the emails, which were leaked on DCLeaks.com, a site that U.S. security experts believe is operated by Russian intelligence services. “The hackers have a lot more,” he told NBC.

Powell, who served under three Republican presidents, has declined to endorse either candidate in the 2016 race, but the emails make his distaste for his party’s nominee apparent. In a Aug. 21, 2016 email to Emily Miller, a former Powell aide turned journalist, the former secretary of state criticized Trump for pushing the “racist” theory that President Barack Obama was born outside of the U.S.

“Yup, the whole birther movement was racist,” Powell wrote, according to BuzzFeed. “That’s what the 99% believe. When Trump couldn’t keep that up he said he also wanted to see if the certificate noted that he was a Muslim.”