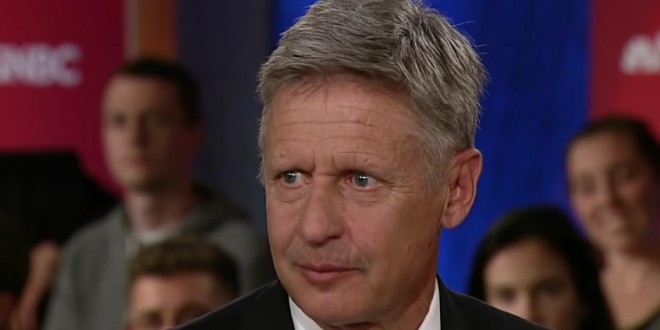 Yesterday Gary Johnson was unable to name a single foreign leader that he admires. And today, this from the editorial board of the Chicago Tribune:

As Nov. 8 looms, a dismayed, disconsolate America waits and wonders: What is it about 2016? How has our country fallen so inescapably into political and policy gridlock? How did pandering to aggrieved niche groups and seducing blocs of angry voters replace working toward solutions as the coin of our governing class? How could the Democratic and Republican parties stagger so far from this nation’s political mainstream? And the most pressing question: What should tens of millions of voters who yearn for answers do with two major-party candidates they disdain? Polls show an unprecedented number of people saying they wish they had another choice.

With that demand for a principled president paramount, we turn to the candidate we can recommend. One party has two moderate Republicans — veteran governors who successfully led Democratic states — atop its ticket. Libertarians Gary Johnson of New Mexico and running mate William Weld of Massachusetts are agile, practical and, unlike the major-party candidates, experienced at managing governments. They offer an agenda that appeals not only to the Tribune’s principles but to those of the many Americans who say they are socially tolerant but fiscally responsible. “Most people are Libertarian,” Johnson told the Tribune Editorial Board when he and Weld met with us in July. “It’s just that they don’t know it.”

We reject the cliche that a citizen who chooses a principled third-party candidate is squandering his or her vote. Look at the number of fed-up Americans telling pollsters they clamor for alternatives to Trump and Clinton. What we’re recommending will appeal less to people who think tactically than to conscientious Americans so infuriated that they want to send a message about the failings of the major parties and their candidates. Put short: We offer this endorsement to encourage voters who want to feel comfortable with their choice. Who want to vote for someone they can admire.