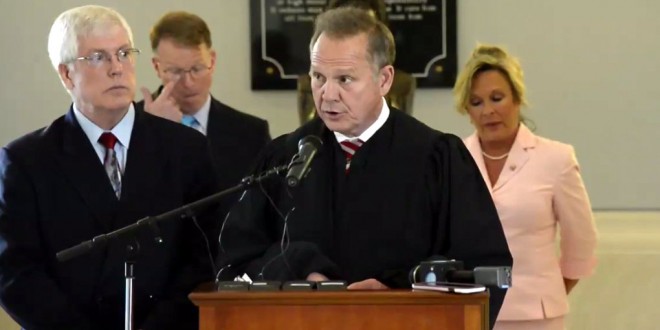 AL.com has the big news:

Alabama Supreme Court Chief Justice Roy Moore has been suspended from the bench for telling probate judges to defy federal orders regarding gay marriage. The Alabama Court of the Judiciary (COJ) issued the order Friday suspending Moore from the bench for the remainder of his term.

“For these violations, Chief Justice Moore is hereby suspended from office without pay for the remainder of his term. This suspension is effective immediately,” the order stated. The court found him guilty of all six charges of violation of canon of judicial ethics. Moore was tried Wednesday before the COJ on the six charges that claimed he violated canons of judicial ethics regarding that Jan. 6 administrative order to the state’s 68 probate judges.

Prosecutors said Moore’s order sought to have probate judges defy the U.S. Supreme Court’s ruling that declared gay marriage legal nationwide and halt the issuance of marriage licenses to same-sex couples. Moore and one of his attorneys said at the trial that the order was just a status report on the state of a petition that had been pending before the Alabama Supreme Court and did not tell the probate judges to defy federal orders.

The nine-member Court of the Judiciary thought otherwise and issued the sanction. The nine member court had several options – acquit Moore, remove him from the bench, suspend him without pay, or issue a statement of censure expressing disapproval. Removal from the bench required a unanimous decision and any of the other sanctions require a minimum 6-3 vote. Moore can appeal the ruling to the Alabama Supreme Court.

Stand by for an avalanche of sadz!

Previous Today Is International Blasphemy Rights Day And Catholic League Blowhard Bill Donohue Is Very Unhappy
Next Trump In 1999: Ivanka Made Me Promise Not To Date Girls Younger Than Her And The Field Is Very Limited