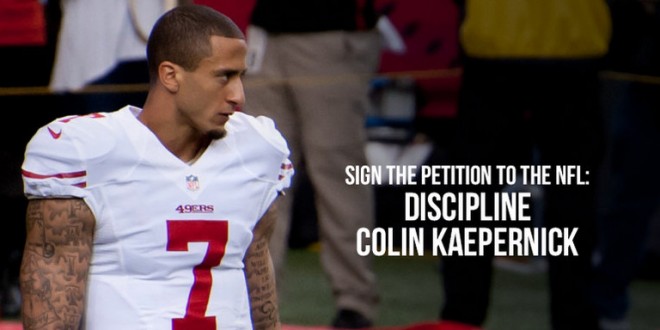 As a player who wears a professional football uniform, Kaepernick is a public representative of the National Football League and the San Francisco 49ers football team. His actions continue to embarrass all professional sports and bring reproach on his team. America is also stunned at his overt disrespect for the nation that guarantees him the freedom to earn millions of dollars each year.

It is important for the NFL to take necessary steps to insure that its players, coaches, and teams show proper respect for our country and our police officers. If Kaepernick is allowed to continue his deeply offensive actions, it will only lead to other such movements by other players in the future. Sign the petition calling on the NFL to take disciplinary action against Colin Kaepernick for his disrespectful actions while engaged in official NFL activities.

Right wing sites are pointing to the recent example of Curt Schilling, who was fired by ESPN after posting a viciously anti-transgender cartoon on his social media accounts.