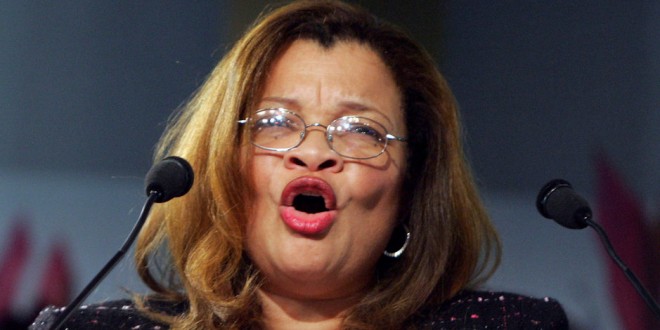 Here’s some rare evangelical infighting about gay parenting. First, a report from Circa:

The revelation was included in a Trump campaign fact sheet accompanying the plan, and it includes only one caveat: “The benefits would be available in the same way that the IRS currently recognizes same-sex couples: if the marriage is recognized under state law, then it is recognized under federal law.”

Evangelical Christian organizer David Lane, the California-based founder of the American Renewal Project and a recent host of a Trump event in Florida, said, “we applaud Donald Trump for wishing to make families stronger, but not with the help of social engineering.”

He said “evangelicals are not going to support a policy that has anything less than a mommy and daddy in the home. Studies show that children best flourish when one mom and one dad are there to rear them.”

And here’s a press release just issued by anti-LGBT activist Alveda King, who was recently hired by Fox News:

There is yet again more controversy, this time about whether or not Mr. Trump should include children of homosexual parents, partners or adopters in the health care plan. Even in a case like this, Prolife would dictate that an innocent child deserves protection and health care.

While both abortion and homosexual marriage are anti-Bible, all the children are alive and in need of God’s grace, in and out of the womb; as well as do those who birth or adopt them.

At the end of the day, a child is a child no matter what. This current argument about human sexuality and healthcare for children is yet another tactic designed to cause distraction, angst and confusion.

It’s like putting the children in the middle of a child custody battle. The children are innocents, not to be used as pawns. Grace is needed on behalf of the children. “I do not frustrate the grace of God: for if righteousness come by the law, then Christ is dead in vain.” – Galatians 2:21 KJV.

Ivanka Trump says gay male parents will not be eligible for paternity leave under the proposed plan. Via the Washington Blade:

The campaign of Donald Trump is promoting his newly unveiled maternity plan as the brainchild of his daughter, Ivanka Trump, but don’t look to her for assurances the benefits would cover gay men in same-sex relationships raising children.

In an interview published Wednesday with the women’s magazine Cosmopolitan, Ivanka Trump implied gay men would be excluded from the plan as she touted its extension of benefits to women everywhere, including those in same-sex marriages.

Asked why the plan doesn’t cover paternity leave, Ivanka Trump said the plan is a “giant leap from where we are today, which is sadly, nothing.” She added, “for same-sex couples as well, there’s tremendous benefit here to enabling the mother to recover after childbirth.”

“So it’s meant to benefit, whether it’s in same-sex marriages as well, to benefit the mother who has given birth to the child if they have legal married status under the tax code,” Ivanka Trump said.