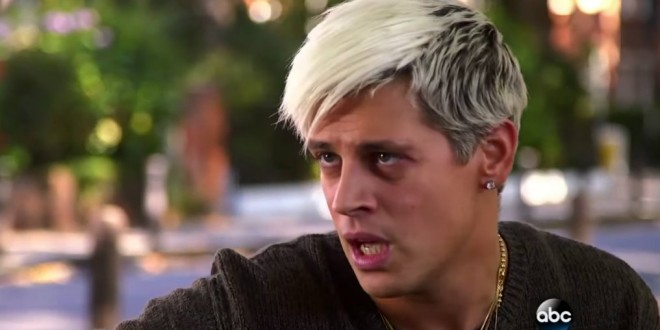 ABC Reporter Confronts Homocon Milo Whatsisopoulus: What Are You, A 13 Year-Old Idiot? [VIDEO]

The interview didn’t go as Breitbart expected and they are very upset about it. They write:

ABC’s Terry Moran launched a full scale attack on Breitbart Tech editor Milo Yiannopoulos as part of a feature for ABC Nightline, calling Milo an “idiot,” “revolting” and comparing him to a “13-year-old” child.

The piece centered around the topic of trolling, with ABC describing Milo as “the tip of the iceberg in a rising tide of hate and abuse in social media, one he clearly sees as a noble purpose.” Asked by Moran whether he would call Leslie Jones a “dude” to her face, Milo confirmed that he “probably would.”

“Then you’re an idiot,” Moran angrily replied. The segment continues, describing Milo as a “self-proclaimed troll” who “makes a career out of sparking outrage, spreading vitriol at many and helping to legitimize a movement of negativity growing on the internet.”

“You’re going to go after somebody’s body to go after their ideas, what grade are you in? Are you a 13-year-old?,” to which Milo said that the real problem lies with the body positivity movement and the “idea that you can tell women they’ll be happy and health at any size.”

Previous Media Matters Threatens To Sue Roger Ailes After Report That He Had Their Phone Records Hacked
Next REUTERS: Trump Isn’t Paying His Top Staffers