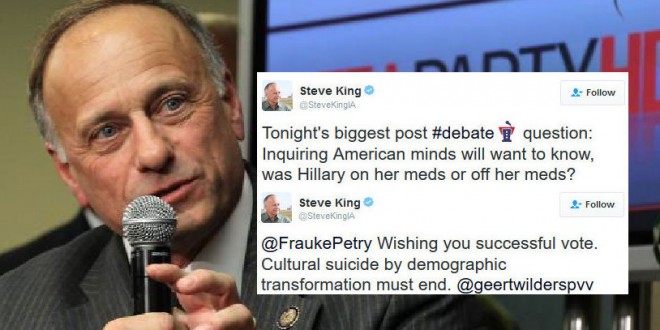 A Double Dose Of Assholery From Rep. Steve King

Teabagger US House Rep. Steve King, whose relentless loonery (see below) is just a half-step behind Louis Gohmert, began the day by mocking the health of Hillary Clinton, just as White Jesus would want. Also getting attention today is King wishing luck to Frauke Petry, the chairwoman for Germany’s far-right and virulently anti-LGBT Alternative für Deutschland party, which currently holds zero seats in the Bundestag, but is gaining ground in the state legislatures, where they now about 10% of the seats. That tweet includes a smiling photo of King, Petry, and Dutch extremist Geert Wilders, who was banned from the United Kingdom for inciting racial hatred.