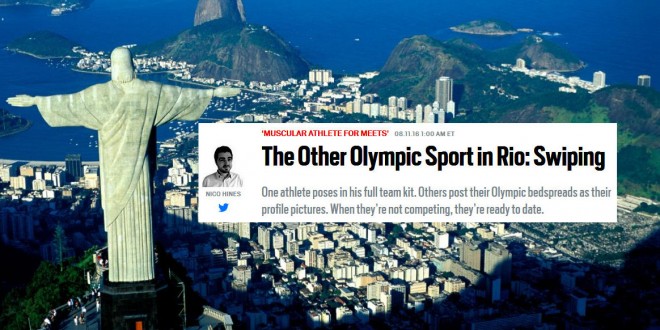 On Thursday morning, the Daily Beast published an exceedingly gross and bizarre article by a straight, married male writer who lured in gay Olympians through hookup apps for no particular purpose.

The entire piece is an astoundingly creepy exercise in Grindr-baiting, which involves a journalist accessing Grindr in an unlikely setting and … seeing what happens. But the Daily Beast piece, penned by Nico Hines, is a uniquely disgusting and irresponsible entry into the tired genre.

Hines entices his (often closeted) subjects under false pretenses; effectively outs several closeted athletes who live in repressive countries; then writes about the whole thing in a tone of mocking yet lurid condescension. By 10:30 a.m. ET, the Daily Beast had, in response to criticism, edited out the most identifying details about closeted athletes—but that’s too little, too late.

In this pseudo-ethnographic piece, Hines has failed at meeting one of journalism’s central tenets. For reference, the Society of Professional Journalists’ code of ethics has an entire section on “minimizing harm.” In it, SPJ says, “Ethical journalism treats sources, subjects, colleagues and members of the public as human beings deserving of respect.”

Hines, who is married with children, included the heights, weights and countries of origin of several athletes whom he arranged dates with. That he saw this as no big deal is a huge problem and shows that he is blind to his own privilege by writing the piece.

Putting an Olympian’s stats next to their country of origin endangers the well-being of that person, especially when one athlete was from Central Asia, a region in which LGBT people are “marginalized, criminalized, and are exposed to high levels of violence, harassment and discrimination,” according to one U.S. congressman’s testimony.

Scottish MP Stewart McDonald, vice-chair of Parliament’s All-Party Parliamentary Group on Global LGBT Rights, hit out at the “damaging” story. He said: “The Nico Hines ‘story’ on Grindr and the Olympics village is not journalism. It’s trashy at best and incredibly dangerous at worst.

“What he has done is potentially extremely dangerous for at least one person in his article and will no doubt cause fear and alarm for individuals practically outed by him. He should be ashamed. I invite Nico Hines to meet with me, members of the APPG and others, so he can fully grasp the potential impact of what he has done.”

The Daily Beast does damage control:

A number of readers complained to The Daily Beast after the publication of the original iteration of this story. We take such complaints seriously because a central part of The Daily Beast’s mission is to fight for full equality and equal treatment for LGBT people around the world.

Publishing an article that in any way could be seen as homophobic is contrary to our mission. There was some concern that the original version of this story might out gay male athletes, even by implication, or compromise their safety.

This was never our reporter’s intention, of course. No names were ever used and some of the profiles described were of straight women. But there was a concern that even mentioning the home nation of some gay athletes could compromise their safety. As a result, we have removed all descriptions of the men and women’s profiles that we previously described.

The now-redacted article is here.