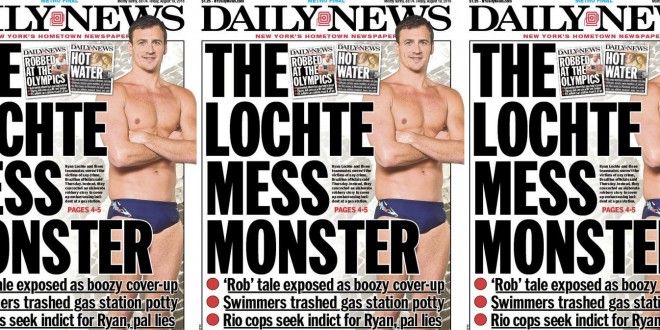 The U.S. Olympic Committee Thursday night apologized to Brazil for the “distracting ordeal” stemming from what Brazilian authorities call a fabricated claim of a gunpoint robbery by a group of swimmers in Rio de Janeiro.

“The behavior of these athletes is not acceptable, nor does it represent the values of Team USA or the conduct of the vast majority of its members,” the statement said. “We will further review the matter, and any potential consequences for the athletes, when we return to the United States.”

Their behavior was also blasted by the head of USA Swimming, Chuck Wielgus Thursday night.

“While we are thankful our athletes are safe, we do not condone the lapse in judgement and conduct that led us to this point. It is not representative of what is expected as Olympians, as Americans, as swimmers and as individuals,” the statement said.

Brazilian police are considering charging a group of U.S. Olympic swimmers with vandalism and giving false testimony, including gold medalist Ryan Lochte, after accusing them of lying about an incident that marred South America’s first Games.

“There was no robbery as the swimmers described it,” civil police chief Fernando Veloso told a news conference, adding that it would be noble and dignified if the swimmers were to apologize to the people of Rio.

Brazil’s Presidential Chief of Staff, Eliseu Padilha, chimed in, saying the swimmers should be held accountable. GloboNews reported that police were recommending prosecutors charge Lochte and fellow gold medalist Jimmy Feigen with falsely reporting a crime, but a police source later said this had not yet happened.