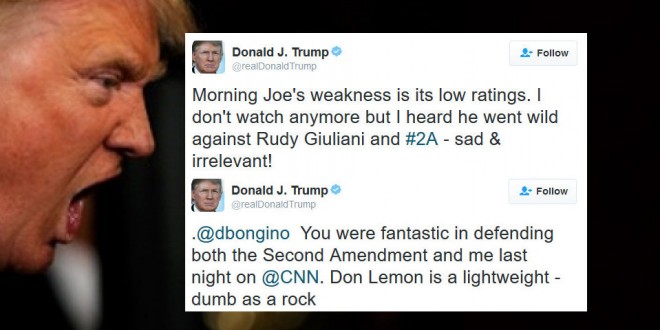 Here’s what Hair Furor is screaming about today. Via Politico:

On Wednesday morning, Scarborough, a former Republican congressman, criticized the Republican Party for its continued support of Trump on his flagship show, “Morning Joe.”

“Let me say this to my Republican Party,” he said. “You are letting Donald Trump destroy the party. And you’ve done it from the beginning. We’ve said from the very beginning when he started blowing himself up. When Paul Ryan endorsed him, that it’s only going to get worse. And it just keeps getting worse, doesn’t it?”

Scarborough’s comments came a day after he wrote an op-ed in The Washington Post calling for the GOP to drop Trump from the ticket. Scarborough was incensed by Trump’s statement that “Second Amendment people” might be the only group able to stop Hillary Clinton from appointing liberal Supreme Court justices. Many took the comment to be a call for violence against Clinton.

Don Lemon and a Republican congressional candidate were practically at each other’s throats on CNN tonight over Donald Trump‘s comments about “Second Amendment people.” Dan Bongino insisted to Lemon that he’s “trying not to break down in laughter” because it was clear what Trump said, and it wasn’t an implication of violence.

Lemon insisted that Trump has a responsibility to be clear about what he says, but Bongino shot back, “You didn’t come into this with a clear and open mind!” And then Lemon went off: “What you’re saying right now makes no sense! I’m sitting at home, I’m watching Donald Trump. I have two ears and I have two eyes and I can see the reactions. We’re not stupid!… You should be ashamed of yourself!”