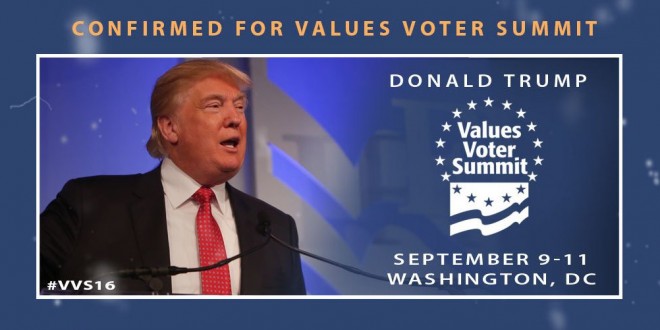 Today friend-to-the gays Donald Trump will keynote an Orlando convention hosted by the Liberty Counsel. And next month he’ll do the same for the KKK-affiliated Family Research Council. Via press release:

Donald Trump will address the 11th annual gathering of the Values Voter Summit, an event that draws thousands of grassroots activists to the nation’s capital. Trump is scheduled to speak Friday, September 9 – just 59 days before Election Day. This is the first time a Republican nominee for president has addressed the Values Voter Summit since its inception in 2006. Both major party nominees have been invited to make their case to social conservative voters.

“As the 2016 presidential election approaches, there is a growing understanding among voters that the future of our freedoms and our identity as Americans hang in the balance. We are therefore very encouraged that Donald Trump has accepted our invitation to address the Values Voter Summit and make his case directly to conservative activists from across the country. The fact that he is the first Republican nominee to attend since the Summit’s inception in 2006, demonstrates his understanding of the importance of values voters in the general election and his desire to work with them in addressing the critical issues facing our nation,” said Family Research Council Action President Tony Perkins.

In 2012 Mitt Romney did not appear at the Values Voter Summit, but he did send them a prerecorded video message which was played at the main event.