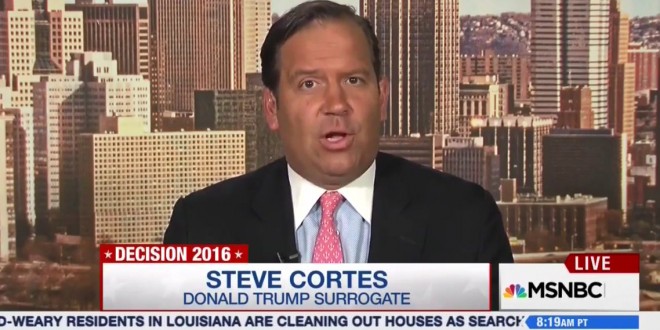 Joy Reid held a panel on Sunday to address Stephen Bannon‘s hiring by the Donald Trump campaign on Sunday. During the discussion, one of the mogul’s supporters gave a really weird reason for why hiring the chief of Breitbart isn’t proof that the Trump movement is becoming increasingly far-right.

Reid brought up examples of Breitbart affiliation with the alternative-right, specifically by noting the antics of their tech editor and prominent provocateur, Milo Yiannopoulos. As part of his defense, Steve Cortes dismissed the alt-right notion by…bringing up Yiannopoulos’ homosexuality.

“I wouldn’t say they are white nationalists. And Milo, by the way, who you cite, is certainly the most known member of the alt-right, he’s very provocative. He’s also incredibly gay! And very, very public about it.”

Reid responded by pointing out that somebody actually can be both gay and racist.