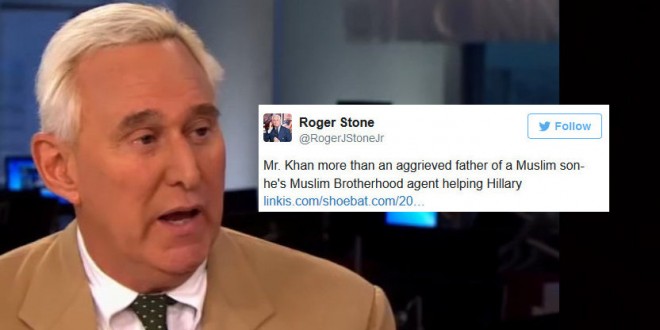 Last night leading Trump surrogate and pro-Trump super PAC head Roger Stone tweeted out a link to the site of Ted Shoebat and his father, Walid, who claim that Khizr Khan is an agent of the Muslim Brotherhood. As regular JMG readers know, the Shoebats frequently call for the executions of homosexuals, women who have abortions, and Christians who support LGBT rights. Two months ago Ted Shoebat even called for Hillary Clinton to be executed for witchcraft.

The Shoebats argue that “Khan is a Muslim plant working with the Hillary Clinton campaign, probably for the interest of Muslim oil companies as well as Muslim immigration into the U.S.”

It’d be kind to say their evidence is circumstantial at best. Among the leaps in logic, “Khan wrote the paper in the eighties while he was in Saudi Arabia, the motherland of Wahhabism, which means that Khan clearly had a Wahabist connection.” Or, “According to a recent report, Khan moved from Pakistan to the United Arab Emirates, a hotbed for the Muslim Brotherhood.”

The site even attacks Captain Humayan Khan, the decorated soldier who died serving in Iraq. “In regards to his son, many were the ‘Muslim martyrs’ who joined the US military…” they argue. “Is it likely that Khan’s son was killed before his Islamist mission was accomplished? Only another type of investigation will determine that.”

CNN has banned Stone from appearing on their network for his history of racist tweets and for calling for the executions of Bernie Sanders, Hillary Clinton, and others.

RELATED: Stone has been at the center of countless scandals and controversies going back to the Nixon administration. Among those was his admission of placing personal ads seeking “exceptional muscular men” to screw his wife while he watches. Stone had initially blamed the ads on a vindictive former employee. Ironically, Stone’s search for such a tryst is basically the literal definition of “cuck” – the favorite insult of the alt-right – albeit in his case it’s a fetish. This 2008 New Yorker profile is really something.

Previous Trump Surrogate Scottie Hughes: Trump Sacrificed His First Two Marriages Because He’s A Job Creator [VIDEO]
Next Cleveland Pride Is (Sort Of) Back On