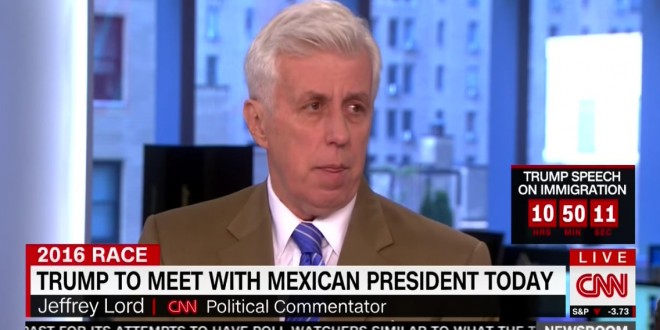 Because Mexico is a remote, mysterious country that’s been shrouded from western eyes during its decades of communist rule. Via Raw Story:

CNN contributor Jeffrey Lord on Wednesday praised Donald Trump for going to Mexico, comparing it to President Nixon’s historic trip to China. Historians have said that Nixon’s 1972 trip to China is in the same league with the greatest presidential accomplishments like President John F. Kennedy’s response to the Cuban Missile Crisis and Abraham Lincoln’s leadership during the Civil War.

And on Wednesday, Lord claimed Trump’s meeting with Mexico President Enrique Peña Nieto should be added to the pantheon of presidential accomplishments. “One of the things that crossed my mind was Richard Nixon going to China,” Lord opined. “Where you have a president in that case that was a hardline anti-communist and yet he opened the doors for real change with China.”