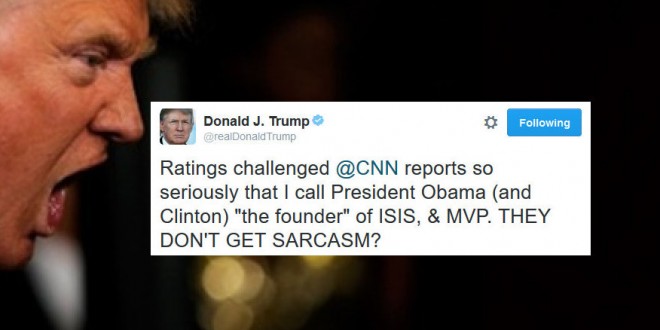 Trump: Don’t You People Get Sarcasm?

Here we go again. From the New York Daily News:

Maybe Donald Trump doesn’t know what sarcasm means. The GOP presidential nominee blasted the media early Friday for allegedly misunderstanding the sarcasm in his assertion that President Obama founded ISIS — and just hours after he claimed he really meant what he said.

“Ratings challenged @CNN reports so seriously that I call President Obama (and Clinton) ‘the founder’ of ISIS, & MVP. THEY DON’T GET SARCASM?” the real estate mogul tweeted Friday, referring to coverage of his comments at a Wednesday night rally. But on Thursday, Trump doubled down on the bizarre, factually inaccurate claim.

In an interview with conservative radio talk show host Hugh Hewitt, Trump was asked to clarify the statement. Surely, Trump did not mean that Obama literally created ISIS, Hewitt suggested: Did he mean that Obama “created the vacuum” that allowed ISIS to rise to power?