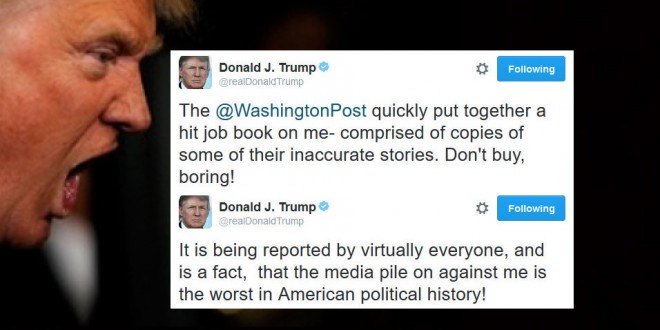 Trump: Don’t Buy The Washington Post’s Boring Book That I Worked With Them For Months To Produce

Donald Trump on Monday slammed the Washington Post reporters and researchers behind a new book about him, calling it a “hit job” made up of “inaccurate” stories. Trump over the past few months spent more than 20 hours speaking with the Post reporters working on the biography, “Trump Revealed: An American Journey of Ambition, Ego, Money, and Power,” according to the newspaper. “Trump was gracious and generous with his time, took nearly all of our questions, and often extended the length of our interviews, sometimes doubling or tripling the allotted time. That level of cooperation was a surprising switch from the campaign’s initial reaction to the book,” reads an adapted excerpt from the book.

Previous Ann Coulter: If Hillary Wins There Will Never Be Another Republican President (But She’s Totally Not Winning)
Next Trump Campaign Manager Kellyanne Conway: OK, He Does Hurl Personal Insults But They Started It [VIDEO]