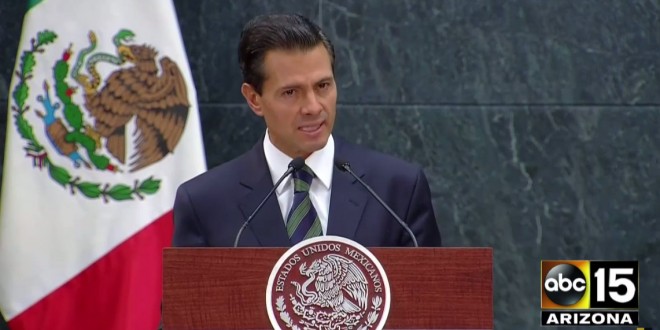 TRUMP BUSTED IN ANOTHER LIE: Mexican President Says He Told Trump They Won’t Pay For The Wall

This afternoon Donald Trump told the press that he and Mexico’s president did not discuss who will pay for the wall. Oh, but wait. Via Reuters:

Mexican President Enrique Pena Nieto on Wednesday told Donald Trump that Mexico would not pay for the Republican presidential candidate’s proposed wall along the Mexico-U.S. border, contradicting Trump’s assertion they didn’t discuss payment. “What the president said is that Mexico, as he has said on several occasions … will not pay for that wall,” presidential spokesman Eduardo Sanchez told Reuters by telephone. Trump earlier told a joint news conference with Pena Nieto after their meeting in Mexico City that the pair had discussed the wall but not who would pay for it.