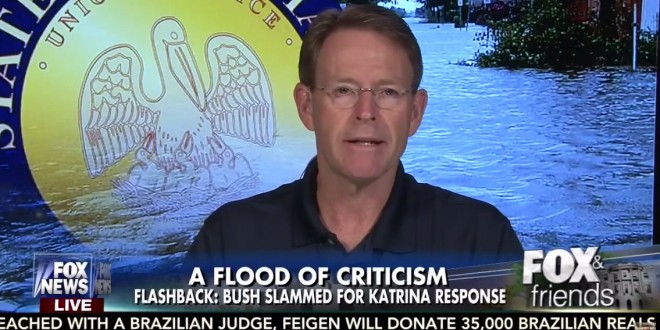 As I reported on Wednesday, God destroyed Tony Perkins’ house this week in a massive flood that left thousands of Louisiana residents homeless. Last night and again this morning Perkins took to Fox News to denounce President Obama for not coming to tour the disaster zone, telling one Fox anchor that Donald Trump “could send a postcard and that would be more than the president has done.” Watch below.

My initial post has become one of the most viral in the history of JMG, with national news organizations around the world barely able to disguise their amusement at the idea of Perkins fleeing his home by canoe while praising God for testing his faith in this way. For example, here’s how the BBC reported the story:

US pastor Tony Perkins, who believes natural disasters are sent by God to punish gay people, has fled his flooded home in Louisiana. In 2015 he caused controversy when he agreed with a statement that natural disasters are sent by God as punishment for abortion and gay marriage. Mr Perkins has revealed that he was forced to escape his property in a canoe with his family. In 2015, he interviewed extreme Messianic Jewish pastor Jonathan Cahn who told him that Hurricane Joaquin, which devastated Hawaii last year, was a “sign of God’s wrath”. During the interview, Mr Cahn stated that the storm was a sign God was angry about the legalisation of gay marriage and abortion and the relationship between the United Nations and Israel. He’s quoted as agreeing, adding “God is trying to send us a message”.