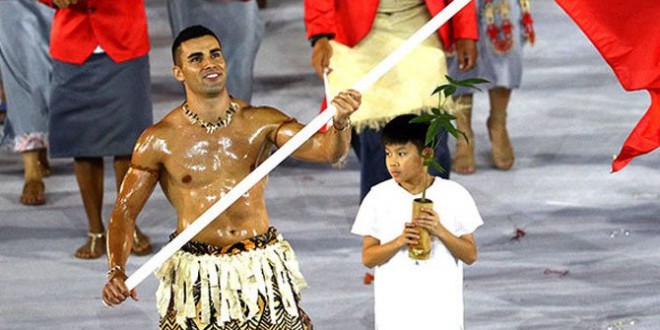 Pita Nikolas Taufatofua could win a gold medal in taekwondo, but his legacy from these Games is probably already cemented as the oiled-up, shirtless flag bearer for Tonga who turned heads and set Twitter ablaze during the Parade of Nations at Friday’s Opening Ceremonies.

Taufatofua isn’t just an oily Olympian. According to his personal website, the Australian-born 32-year-old spent “his whole adult life working in homeless shelters with the underprivileged to show and teach people the power of self belief.”

Taufatofua’s Instagram account features plenty of photos of the first Tongan athlete to qualify for the Olympics in taekwondo with and without his shirt on. Taufatofua’s latest post, from Friday morning, teased “a little surprise” in the Opening Ceremonies. “Don’t blink or you’ll miss it,” he wrote. No one missed it.

Tonga's flagbearer was so oily, countries are looking to invade him #OpeningCeremony