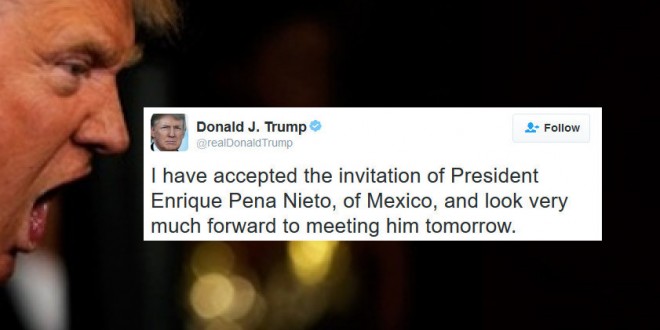 An expected meeting between Trump and Peña Nieto is extraordinary, given Trump’s continued pledges to build a wall on the border with Mexico and make Mexico pay for it. Trump has also stoked fierce criticism in Mexico and in the Hispanic community at large for his inflammatory rhetoric in discussing illegal immigration.

At a Tuesday night rally, Trump stuck to his tough-talking rhetoric. “We are also going to secure our border and stop the drugs from pouring in and destroying our country. And I’ll be talking about that tomorrow night in Arizona, big speech on immigration,” he said in Everett, Washington.

The visit follows months of warring words between Trump and Mexico’s leaders, including when Peña Nieto compared Trump to brutal dictators Adolf Hitler and Benito Mussolini. Trump in the early months of his campaign also leveled unfounded accusations that the Mexican government was intentionally sending its unwanted citizens across the border and into the United States.