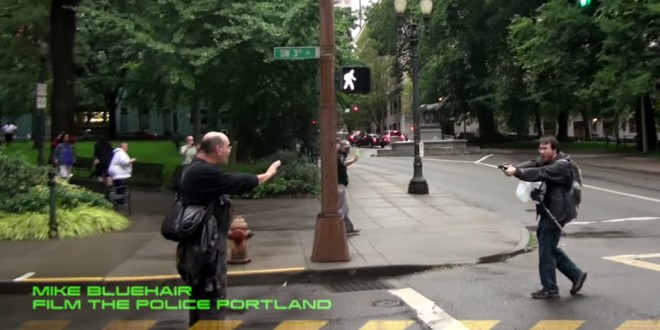 PORTLAND: Trump Supporter Charged With 10 Felony Counts For Menacing Protesters With A Firearm

Last month I reported that a Trump supporter named Michael Strickland had been arrested after brandishing a gun at Black Lives Matter protesters in Portland, Oregon. Yesterday a grand jury returned a 21-count indictment against Strickland, including ten felony counts. Oregon Live reports:

He’s scheduled to be arraigned on the indictment Friday morning. A settlement conference is scheduled for Oct. 13. Strickland was released from custody on July 19, after posting 10 percent of his $250,000 bail. He’s among 18 people who testified before the grand jury, according to the indictment.

Strickland had an extended clip in what appeared to be a Glock 26 that he swept at chest level multiple times in front of Don’t Shoot PDX protesters and a plain-clothed Portland police officer on July 7, according to Multnomah County prosecutor Katie Molina.

Strickland’s attorney contends that he is a journalist with a concealed weapon license who has “every right to protect himself.” As it turns out, Strickland’s writing was largely done for the lie-filled homocon-run extremist site Gateway Pundit, whose owner Jim Hoft (AKA “the stupidest man on the internet”) came out publicly earlier this year. Despite his arrest, his posts remain on the site. (If anybody knows if Strickland himself is gay, let us know.)

According to JMG readers who commented on my first report, Strickland is also well-known in the Portland area for filming local trans women and subjecting them to ridicule on his YouTube channel, which, like his Twitter account, is named “Laughing At Liberals.” The progressive site Little Green Footballs reports that Strickland has been banned from multiple college campuses, presumably for similar assholery.

Previous Bernie Op-Ed: If You Voted For Me, Vote For Hillary
Next Sen. Marco Rubio: My Keynote Address For The Liberty Counsel Is Nothing But A Celebration Of Faith