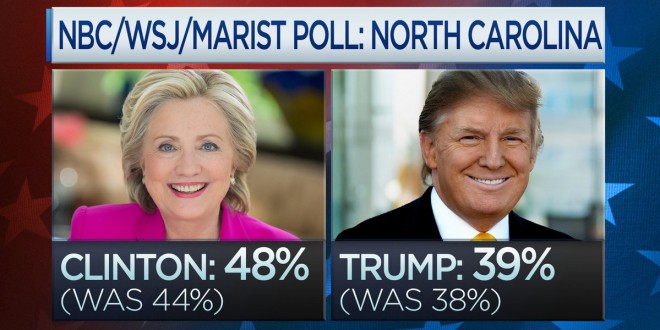 POLLS: Hillary Is “Running The Table” In Swing States

Democrat Hillary Clinton leads Republican Donald Trump in some of the most diverse battleground states – including by double digits in two of them – according to four brand-new NBC News/Wall Street Journal/Marist polls.

In the key battleground of Florida, which President Obama won in 2008 and 2012, Clinton is ahead of Trump by five points among registered voters, 44 percent to 39 percent, with the rest saying neither, other or they’re undecided. (In the same poll before the conventions last month, it was Clinton 44 percent, Trump 37 percent.)

In North Carolina, which Obama won in 2008 but lost in 2012, the former secretary of state has a nine-point advantage over Trump, 48 percent to 39 percent. (A month ago, Clinton was up by six points, 44 percent to 38 percent.)

New WSJ/NBC/Marist poll: Clinton has a lead in Fla and NC, double-digits in Colo and Va. https://t.co/ZamwSWvrIu pic.twitter.com/mDSmZOOvjA