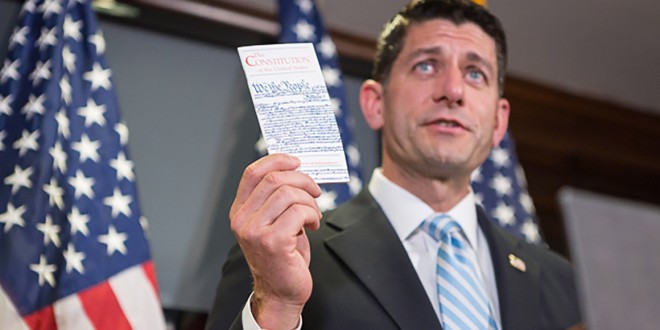 Paul Ryan’s office has released a series of “must-see photos” featuring a shot of the House speaker holding up the Constitution. “Speaker Ryan holds up a pocket Constitution as a reminder that Congress’ first responsibility is to support and defend the Constitution,” the caption reads.

Although Ryan has been pictured holding up copies of the Constitution in the past, the opening photo mirrored “Gold Star” father Khizr Khan’s jab at Trump during his speech on Thursday to the Democratic National Convention, where he likewise held up a pocket copy of the document and suggested the Republican nominee read it.

Speaker Ryan’s office said the photo had no relation to Trump’s comments last week. “The photo was taken at a press conference in July. We just thought it was a good picture,” press secretary AshLee Strong said.

Yeah, we believe that.