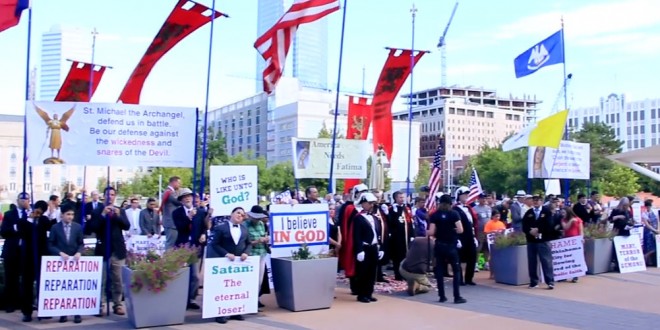 World Net Daily is extremely upset that a group of Satanists used a public venue to stage a black mass. Leading the protest in Oklahoma were the infamous Red-Caped Catholic Loons. Via WND:

They hailed from all Christian denominations and backgrounds, coming by the hundreds to defend their faith. More than a thousand Christians rallied in Oklahoma City to protest a long-scheduled blasphemous ceremony designed to mock Mary, the mother of Jesus.

Though the “black mass” ritual took place as planned, the protests seemed to have an effect, as few attended the Oklahoma City Civic Center Music Hall to witness a ritual entitled “The Consumption of Mary” performed by the Dakhma of Angra Mainyu, a group of “devil-worshipers.”

The Catholic group the American Society for the Defense of Tradition, Family, and Property was one of the most prominent groups at the protest, appearing with their signature banners and sashes.

Dakhma of Angra Mainyu leader Adam Daniels appeared to reference the group and other Christian protesters as the explanation of the ritual’s low attendance. “When you have the whole Roman legion out there, how likely are they [attendees] to come and buy tickets?” he asked.

Daniels’ ritual incorporates a mix of occult practices designed to corrupt and desanctify a statue of Mary, the mother of Jesus. The statue is placed within a Solomonic triangle, a tool of occultism. A pig’s heart is placed within the statue and is consumed after the likeness of Mary is smashed. Burned pages from the Quran and menstrual blood were also reportedly part of the ritual.

The Satanic Temple, which is a group of atheist pranksters, was not involved in the Oklahoma event.