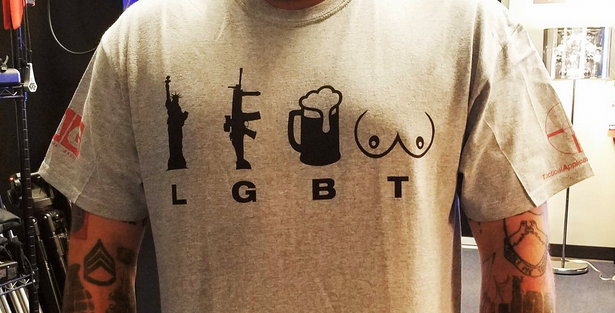 Now On Sale By InfoWars

Last week Donald Trump, the self-proclaimed best friend the gay community ever had, began selling “LGBTQ For Trump” t-shirts. This week Donald Trump’s actual best friends at InfoWars began selling the above t-shirt, the reverse of which bears an American flag and this message: “The Most Patriotic Way To Say Fuck You!” InfoWars host Joe Biggs is promoting the sale on Twitter with gleeful repostings of outraged responses. Other shirts for sale on his site include the messages “Fuck Hillary” and “Pew Lives Matter” – the latter of which features a machine gun.