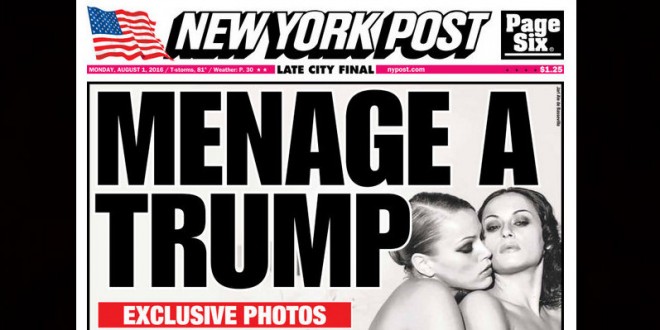 For the second day in a row Rupert Murdoch’s right wing New York Post has slut-shamed Melanie Trump with a front page image that’s too racy to post here on JMG. Such a strange turn for the tabloid. From their story:

Here’s the nation’s would-be first lady — and right beside her, a second lady. Three years before she met husband Donald Trump, Melania Trump was snapped in a nude frolic with another female model, bombshell photos obtained exclusively by The Post show.

The lesbian-themed pics are from a two-day photo shoot in Manhattan in 1995, when Melania Knauss, as she was called, was 25 years old and modeling under the name “Melania K.” Several were featured in Max Magazine, a now-defunct French men’s monthly, more than 20 years ago. Others have never been in print — until now.

The raciest of the photos shows Melania lying nude in a bed as Scandinavian model Emma Eriksson, also naked, embraces her from behind, just below her breasts, which are fully exposed. The Slovenian-born beauty, now 46, first met Trump at a Fashion Week party in 1998. They married in January 2005 and have one son, Baron, 10.

“They’re a celebration of the human body as art,” Jason Miller, the Trump campaign’s senior communications adviser, said on CNN’s Reliable Sources. “There’s nothing to be embarrassed about,” Miller said. “She’s a beautiful woman.” The Post published several nude photos — which were reportedly taken in 1995 and appeared in a now-defunct French men’s magazine — that had not previously been published online. The headline on its cover was “The Ogle Office.”