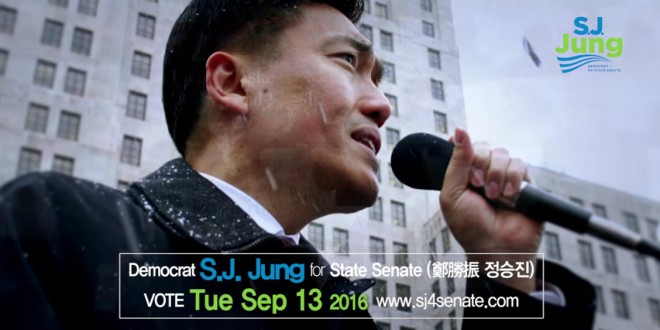 A Democrat waging a primary campaign in Queens vowed to fight to bar pictures of same-sex couples from appearing in school textbooks. S.J. Jung, who is challenging incumbent Sen. Toby Ann Stavisky in the Sept. 13 primary, made the remarks in March to a group made up primarily of Korean churches.

At the same meeting, Jung, according to a report in Korean that was translated into English, spoke of other bills that have been difficult for the religious community and asked for prayers “so I can get elected to the New York State Senate to stop this from happening.”

“I pray Jesus Christ’s love to spread and his message speak through this election and your prayer of faith to make me become a warrior clad in armor,” he told the groups, according to the translation of his remarks.

Previous David Duke Robocalls Louisiana Voters: Vote For Me And Donald Trump To Save White America [AUDIO]
Next Pam Geller: Huma Abedin’s Marriage Was Always A Cover For Her Lesbian Relationship With Hillary Clinton