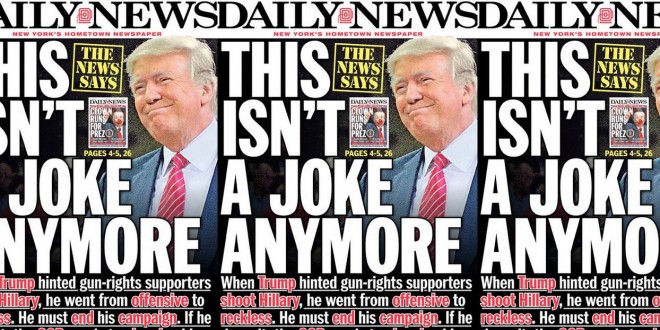 Donald Trump must end his campaign for the White House in a reckoning with his own madness, while praying that nothing comes of his musing about an assassination of Hillary Clinton.

In the event that Trump fails to abandon his candidacy — as he seems determined to — the Republican Party, including vice presidential nominee Mike Pence, must instead abandon Trump for toying with political bloodshed.

Trump hurtled past offensiveness into dangerous recklessness on Tuesday by suggesting violence as a means to prevent Clinton from nominating U.S. Supreme Court justices.

Trump can offer no apology sufficient to make up for insidiously making light of murder. Nor can he explain away or justify planting a notion that could spur a demented follower to kill a political rival, a President or Supreme Court justices.

With notable exceptions, Republican officials have stayed uneasily with Trump while disowning his words and actions. Now, he has left them no choice but to dump Trump.