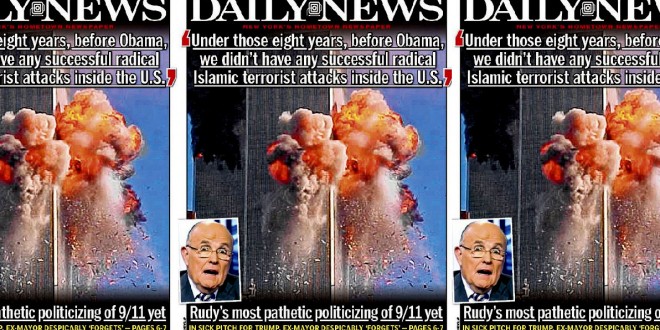 You might want to get that bump on your head checked, Rudy. Former Mayor Rudy Giuliani on Monday appeared to forget about the worst terror attack in U.S. history, claiming that there simply had been no such assaults inside America during the presidency of George W. Bush.

“Under those eight years, before Obama came along, we didn’t have any successful radical Islamic terrorist attack inside the United States,” Giuliani — who was mayor during 9/11 and has capitalized on his response to the tragedy ever since — said in a speech introducing Donald Trump in Youngstown, Ohio.

“They all started when Clinton and Obama got into office,” Giuliani said, bizarrely omitting the horrific 9/11 attacks, which occurred in 2001, when Bush was in office. The extraordinary exclusion of 9/11 was especially peculiar, given that, just a moment earlier Giuliani had been discussing the attacks and praising vice presidential nominee Mike Pence for a “very, very timely” visit to Ground Zero and for his help, as a then-congressman, on the Judiciary Committee to help “fashion the Patriot Act.”