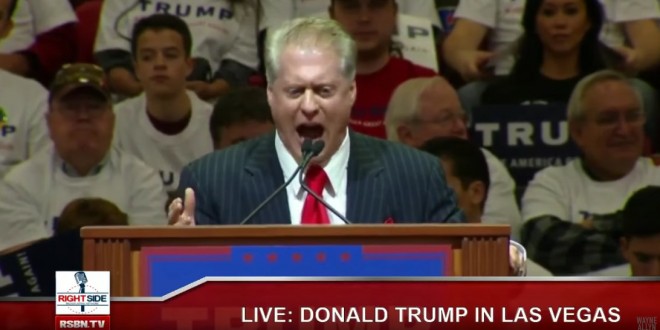 Wingnut commentator Wayne Root, who earlier this year was the opening speaker at a Trump rally in Nevada, today declared that people on public assistance and women who get their birth control through Obamacare should not be allowed to vote. Because if America banned the “takers” from voting, Republicans would sweep every election. Right Wing Watch has the transcript:

“If the people who paid the taxes were the only ones allowed to vote, we’d have landslide victories,” he said, “but you’re allowing people to vote. This explains everything! People with conflict of interest shouldn’t be allowed to vote. If you collect welfare, you have no right to vote. The day you get off welfare, you get your voting rights back. The reality is, why are you allowed to have this conflict of interest that you vote for the politician who wants to keep your welfare checks coming and your food stamps and your aid to dependent children and your free health care and your Medicaid, your Medicare and your Social Security and everything else?”

Root quickly amended his statement to say that receiving Social Security and Medicare shouldn’t disqualify someone from voting, but “in general most of the things I just rattled off should preclude you from voting.” “Social Security should not, Medicare should not, because you paid into the system,” he said. “But all the other stuff, all the other goodies, free Obama phones, free contraception, you know what, you can get them but you shouldn’t be allowed to vote, it’s a conflict of interest. Take that away, we’d win every single election in this country.”

Root is promoting his latest book, Angry White Men. He also has an entry in Snopes as the promulgator of the conspiracy theory that President Obama never attended Colombia University.