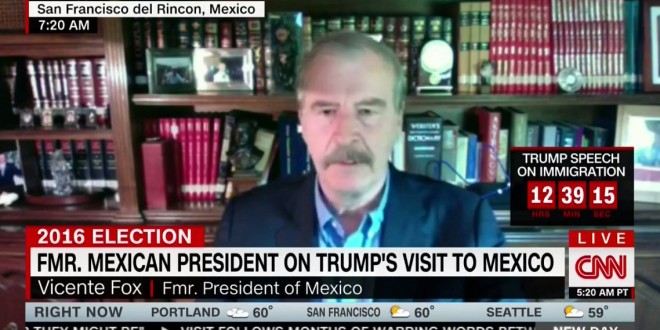 Former Mexican President Vicente Fox on Wednesday morning said that the Mexican people do not want Donald Trump to visit the country, despite Mexican President Enrique Peña Nieto’s invitation for the Republican nominee to attend a meeting.

“We don’t like him. We don’t want him. We reject his message. I don’t understand why President Pena has offered this opportunity. I think it’s nothing more than a political stunt,” Fox said on CNN’s “New Day.” “Trump is using Mexico, is using President Pena to boost his sinking poll numbers. I think that President Pena is taking an enormous political risk by hosting Trump. If he’s perceived as going soft on Trump, it will hurt him greatly.”

Fox is not a big fan of Trump. He made headlines in February when he told Trump that Mexico is “not going to pay for that fucking wall,” and he later called Trump a “false prophet.”

On Wednesday, Fox told CNN that Trump’s decision to meet with the Mexican president is an “opportunistic move.” He also blasted Trump for lying.

“You cannot cheat people. You have to be straight. You have to speak the truth,” Fox said, adding that he hopes Americans will “finally see what is behind Trump, this false prophet that is just cheating everybody.”

Former President Vicente Fox, who is railing against my visit to Mexico today, also invited me when he apologized for using the “f bomb.”

@realDonaldTrump, I invited you to come and apologize to all Mexicans. Stop lying! Mexico is not yours to play with, show some respect.

Previous FLORIDA: Police Agencies Investigate Online Terrorist Threats Against Wilton Manors Gay Bars [VIDEO]
Next Conway: It’s A Shame That People Will Have To Watch The Debates To Find Out Hillary’s Policies [VIDEO]