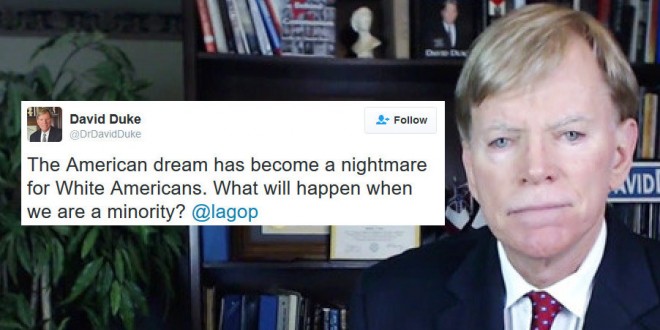 David Duke Robocalls Louisiana Voters: Vote For Me And Donald Trump To Save White America [AUDIO]

A robocall from white nationalist and former Ku Klux Klan leader David Duke urges voters to vote for him for U.S. Senate in Louisiana and for Donald Trump for president. “Unless massive immigration is stopped now, we’ll be out numbered and outvoted in our own nation. It’s happening,” Duke says. “We’re losing our gun rights, our free speech. We’re taxed to death. We’re losing our jobs and businesses to unfair trade. We’re losing our country. Look at the Super Bowl salute to the Black Panther cop killers. It’s time to stand up and vote for Donald Trump for president and vote for me, David Duke for the U.S. Senate.”