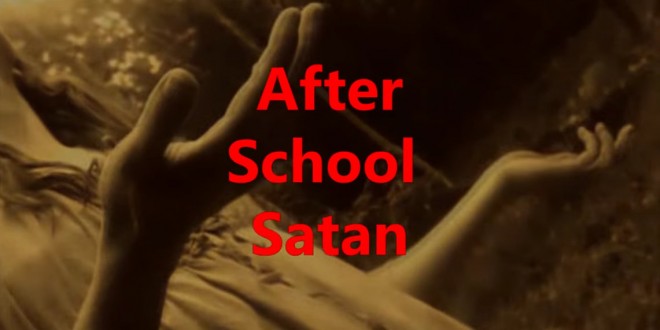 The Satanic Temple has once again gotten the goat of the right wing with its announcement of a national rollout of “After School Satan” clubs. From the Washington Post:

The group plans to introduce its After School Satan Club to public elementary schools, including one in Prince George’s County, petitioning school officials to allow them to open immediately as the academic year starts. Chapter heads from New York, Boston, Utah and Arizona were in Salem on July 10 talking strategy, with others from Minneapolis, Detroit, San Jose, New Orleans, Pittsburgh and Florida participating online. The promotional video, which feels like a mash-up of a horror movie trailer and a “Saturday Night Live” sketch, will serve to promote the new club along with its website — Afterschoolsatan.com.

The Satanic Temple — which has been offering tongue-in-cheek support for the fallen angel in public arenas that have embraced prayer and parochial ceremonies — is bringing its fight over constitutional separation of church and state to the nation’s schools. But the group’s plan for public schoolchildren isn’t actually about promoting worship of the devil. The Satanic Temple doesn’t espouse a belief in the existence of a supernatural being that other religions identify solemnly as Satan, or Lucifer, or Beelzebub. The Temple rejects all forms of supernaturalism and is committed to the view that scientific rationality provides the best measure of reality.

The above-linked story notes that over 3500 Christian-led Good News Clubs have formed in public schools following a 2001 court win by the Liberty Counsel, whose head Mat Staver tells the Washington Post that the Satanic Temple likewise now has “a First Amendment right to meet” in public schools.

But THIS is what Staver is telling the Liberty Counsel’s donors:

“The so-called Satanic Temple group is a handful of atheists masquerading as so-called Satanists. This group is not legitimate. Its only reason to exist is to oppose the Good News Clubs. The Good News Clubs teach morals, character development, patriotism and respect from a Christian viewpoint. Public schools welcome these clubs because they improve the behavior of the students and the Supreme Court has sided with these clubs,” said Mat Staver, Liberty Counsel’s Founder and Chairman.

“The so-called Satanist group has nothing good to offer the students and its entire reason for existence is to be disruptive. Schools do not have to tolerate groups which disrupt the school and target other legitimate clubs. No sane parents would consent to allow their child to attend this group. Full of sound and fury, this group will soon fade away,” concluded Staver. Liberty Counsel has offered pro bono legal counsel to the schools targeted by this disruptive group.

So Staver is telling the mainstream press that yes, it’s all legal, but he’s screaming to his donors that they’ll sue to stop the Satanic Temple. For their part, here’s what the Satanic Temple says: “We would like to thank the Liberty Counsel specifically for opening the doors to the After School Satan Clubs through their dedication to religious liberty.”

VIDEO: Here’s the hilarious launch clip for After School Satan.