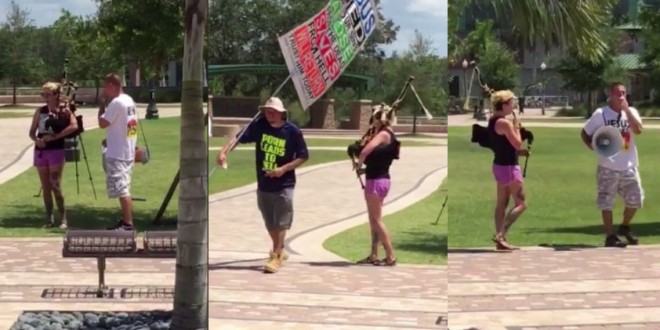 From the Daily Record:

A bagpipe playing student drowned out a homophobic bigot who compared being gay to bestiality in megaphone rant. Brave Brice Ehmig confronted the preacher who was wearing a “Jesus saves from hell” T-shirt on the campus at Florida Gulf Coast University in Fort Myers, USA, on Friday August 19. Despite the preacher’s best efforts to have his voice heard, the fourth year student follows him around continuing to play the loud Scottish music.

As the video ends, applause and cheering can be heard from out of shot as Brice calls her girlfriend over. Brice, originally from Dunedin, Florida, said: “I have seen too much tragedy in the LGBTQ community to let a man in cargo pants tell me I am the embodiment of sin. I am a gay bagpiper and I’m proud. I decided since this is my last year at university that I should do things that make me feel brave.”

The Friendly Atheist reminds us that a Scottish bagpiper did the same thing last year. That clip has 4.6 million views.

Previous Today’s The Big Day For The Anti-Christ
Next Eagle Forum: It’s Not Racist To Hate Mexicans