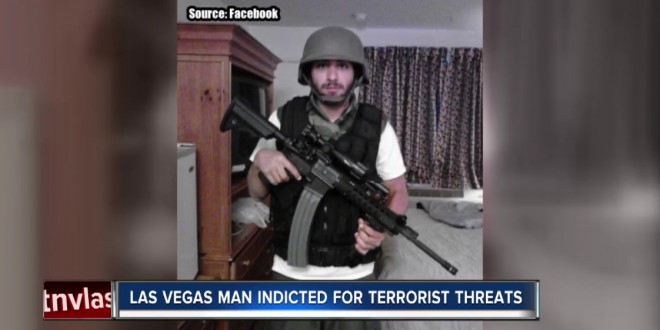 From the ABC affiliate in Las Vegas:

A 24-year-old Las Vegas man has been charged for making terrorist threats in a video that was posted on YouTube. Las Vegas police say they were notified on July 2 by Interpol via Google about a suspicious/threatening YouTube video. Although Google had removed the video, they were able to provide a link for a detective to watch the video.

In the video, a man named Bryce Cuellar reportedly showed off two rifles and was wearing a military flak vest and night vision goggles. Cuellar reportedly said in the video that he is tired of the government trying to take away his First and Second Amendment rights and says that he cannot wait to use his rifle in the manner in which the founding fathers intended.

He also said that he wanted to kill “gays, faggots, lesbians and satanists” and claimed to be a Christian warrior. Cuellar also said that he is tired of America and would begin killing soon. Police also checked his Facebook page and found posts about the Orlando shooting and posts that outlines his anti-government, sovereign citizen and militia ideologies.

According to the police, a YouTube channel affiliated with Cuellar has 160,000 subscribers and its videos have been viewed 73 million times.