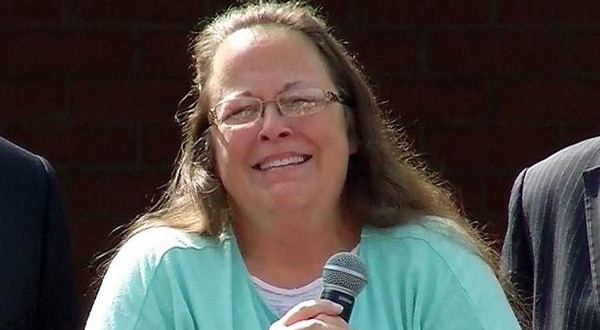 A federal judge on Thursday dismissed three lawsuits pending against Rowan County Clerk Kim Davis over her refusal to issue marriage licenses in 2015, following the legalization of same-sex marriage by the U.S. Supreme Court.

The issue is now settled, U.S. District Judge David Bunning wrote in his order. At Davis’ request, Gov. Matt Bevin and the General Assembly changed state law this year to remove county clerks’ names from marriage licenses. And in Rowan County, one of Davis’ deputy clerks has been issuing licenses to all couples, same-sex and opposite-sex, since Davis was briefly jailed for contempt of court last summer after violating Bunning’s order to resume issuing licenses.

“In light of these proceedings, and in view of the fact that the marriage licenses continue to be issued without incident, there no longer remains a case or controversy before the court,” Bunning wrote.

The Liberty Counsel reacts in the usual fashion:

“Kim Davis has won! We celebrate this victory for her and for every American,” said Mat Staver, Founder and Chairman of Liberty Counsel. “County clerks are now able to perform their public service without being forced to compromise their religious liberty. The case is now closed and the door has been shut on the ACLU’s attempt to assess damages against Kim Davis. This victory is not just for Kim Davis. It is a victory for everyone who wants to remain true to their deeply-held religious beliefs regarding marriage while faithfully serving the public,” said Staver.

Previous REUTERS: Hillary +8 Nationally In New Poll
Next When Jim Bakker Gives You A Year Of Food Buckets