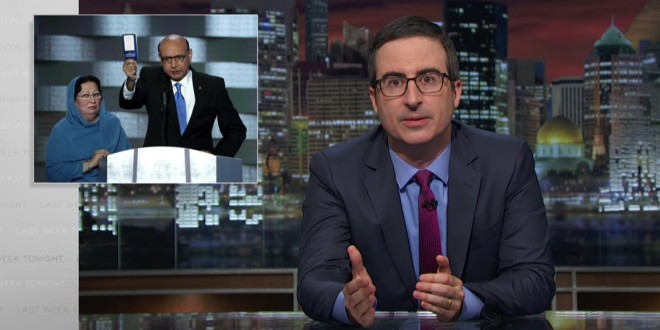 The host of Last Week Tonight on HBO devoted his deep-dive segment to recapping the Republican and Democratic National Conventions Sunday night, emphasizing the the language used by Donald Trump in the days since Khizr Khan emotionally spoke in Philadelphia.

Khan, the Muslim father of fallen U.S. Army Captain Humayun Khan, has inadvertently gotten into a feud of sorts with the Republican nominee that stemmed from a DNC speech Thursday night. “If you look at his wife, she was standing there, she had nothing to say, she probably — maybe she wasn’t allowed to have anything to say, you tell me,” said Trump to George Stephanopoulos this weekend, noting Ghazala Khan‘s silence during the DNC speech.

It took an officially released statement from the campaign for Trump to finally acknowledge Capt. Humayun Khan as a “hero,” a stick point that Oliver sharply criticized Sunday night. Perhaps, offered the late night host, Ghazala Khan is too overwhelmed to speak, “when she sees images of her dead son’s face, you fucking asshole.”