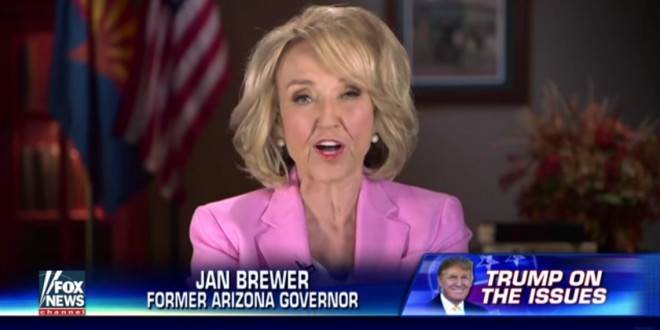 Former Arizona governor and Trump supporter Jan Brewer referred to Hillary Clinton as a “lying killer” and affirmed that Democrats would not flip her home state in November.

Making her weekly call-in Tuesday to Mac & Gaydos on KTAR News, Brewer said that if Democrats wanted to pump campaign money into the state economy that would be “good for us,” but they had no hopes of actually turning Arizona blue.

“People want a fighter. They’re tired of the lying killer Hillary Clinton and Bill Clintons of the world,” she said. Asked if Trump could stay on message, she said she agreed that he could do a better job shifting from his bombastic primary style to talking more about jobs and the economy.

Previous Glenn Beck To Republicans: Jump Ship Now Because November Will Be A Bloodbath Due To Breitbart
Next Trump Mouthpiece Michael Cohen Denies Trump Is Behind In All The Polls: Says Who? Says Who? [VIDEO]