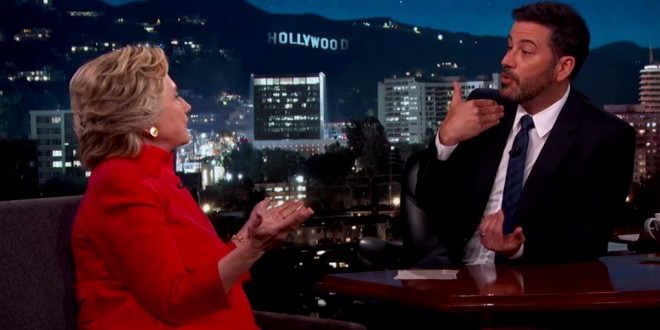 First, Kimmel quizzed the Democratic presidential candidate about news that broke earlier in the day of the release of additional emails from the time she served as secretary of state.

“The state department said that they have to release 15,000 emails by the deadline is a couple of days before the debate,” Kimmel said. “Are you concerned about that?”

“No,” Clinton responded. “Jimmy my emails are so boring. And I’m embarrassed about that. They’re so boring. So we’ve already released, I don’t know, 30,000 plus so what’s a few more.”

When Kimmel asked Clinton about the rumors swirling about her health, she offered up her hand and said “take my pulse.”

Kimmel agreed as Clinton explained “to make sure I’m alive.” That’s when Kimmel took her hand and gasped telling the audience “oh my god there’s nothing there.”

Clinton played off Kimmel’s words, implying that the stories are baseless. “With every breath I take, I feel like it’s a new lease on life,” Clinton quipped sarcastically.

Kimmel then had Hillary open a jar of pickles. For real.