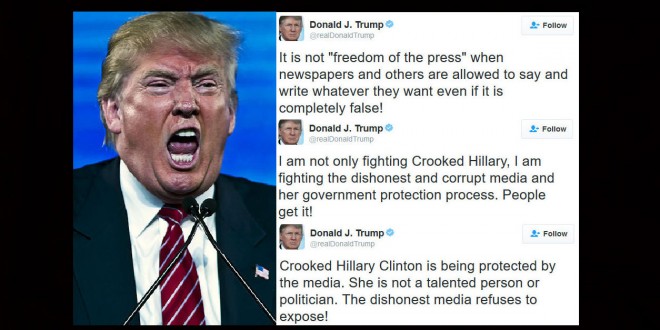 Hair Furor Continues To Rant Against The Press

We knew all along Donald Trump hated the media. We knew he wanted to loosen those libel laws. But we didn’t have confirmation until today just how ignorant he is about freedom of the press.

Trump went on yet another anti-mainstream media tweetstorm today, which capped off with kind of an amazing declaration: “It is not ‘freedom of the press’ when newspapers and others are allowed to say and write whatever they want even if it is completely false!” That is literally the definition of freedom of the press.

Miller spent the first part of the segment complaining about the New York Times report on internal campaign chaos––a report Trump has trashed––and going so far as to say, “I wish people would cancel their subscriptions to The New York Times.”

Stelter asked him if this isn’t just an example of a true story that’s just “painful to read.” Miller insisted the campaign is unified.