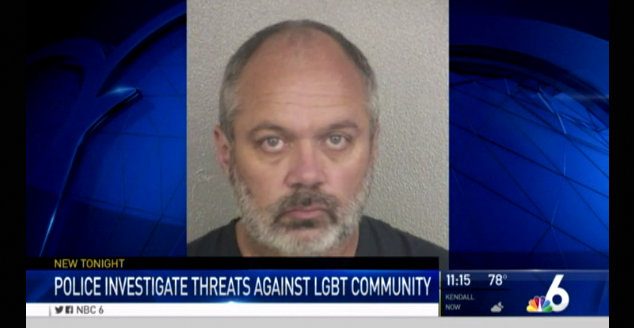 The suspect is a gay man with a lengthy criminal history who is very well known to the South Florida bear community, bar owners, and club promoters. Via Miami’s NBC affiliate:

The Broward LGBT community is on edge after threats were made on social media. Some bars in Wilton Manors, like Rumors Bar and Grill, are stepping up security with armed guards in response to the online threats.

Wilton Manors Police is looking into the case, taking the threats very seriously. The FBI is also possibly investigating the threats. “He wants to do bigger than the Orlando massacre and he wants to come down here and do it in Wilton manors,” said Nick Berry, owner of Rumors Bar and Grill.

That’s no exaggeration. In the Facebook threats, a man by the name of Craig Jungwirth is using someone else’s photo to troll social media. In one of the posts, the man allegedly wrote “if you losers thought the Pulse Nightclub shooting was bad, wait ’til you see what I’m planning for Labor Day.”

The website Peacock Panache has been following the Jungwirth story for months although the terrorist threats apparently only just began. Read this post for a thorough up to the minute recap. Back in March, the South Florida Gay News also reported extensively on Jungwirth. Wilton Manors police issued a statement last night:

The Wilton Manors Police Department (WMPD) takes all matters seriously especially when someone threatens the lives of the Wilton Manors Community to include our residents, business owners/employees, visitors, and the surrounding communities.

Please know that our Police Officers and Detectives are thoroughly investigating this serious matter and we ask the community to continue to contact local law enforcement officials should they hear or see any other additional posts on Social Media/new threats made by these individual(s) or anyone else.