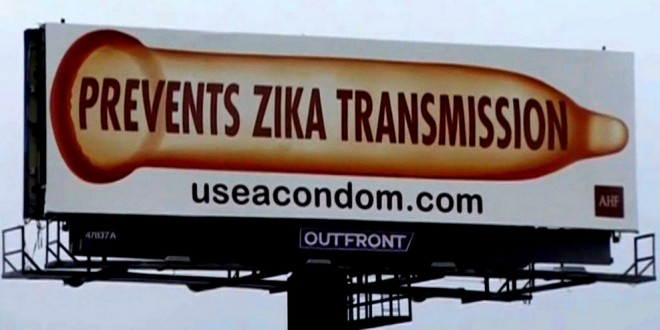 Two billboards designed to bring awareness to the spread of the Zika virus have been removed in Broward County after their depiction of an unrolled condom stirred controversy. A spokesperson with the AIDS Healthcare Foundation said pressure from the Fort Lauderdale Mayor’s office and the Tourism Board caused their signage company to pull the ad from their locations along Interstate 95 and Interstate 595, near Fort Lauderdale-Hollywood International Airport, Tuesday. “They felt, I guess, that they could impact tourism,” said Michael Kahane. “I find it completely disgusting.”

The Mayor’s office told 7News they had no part in bringing down the billboards. However, tourism officials are telling a different story. The Greater Fort Lauderdale Convention and Visitors Bureau said a member of their advisory board found the billboard inaccurate because the Centers for Disease Control and Prevention said condoms can only reduce the risk of Zika transmission. Moreover, they said they don’t have the power to bring down the billboard, adding it was the signage company’s call. In a statement issued on Wednesday, the bureau’s president and CEO, Stacy Ritter, said, “We relayed that concern to the billboard company. To my knowledge, that is the extent of our involvement.”

Previous Federal Judge Rules That Hobby Lobby Decision Means Transgender Employees Can Be Fired Because Jesus
Next Bill Clinton: The Clinton Foundation Will No Longer Accept Foreign And Corporate Donations If Hillary Wins